Travel through the stunning landscape of mainland Greece, learning about the wonderful past of a civilization immortalized in myth. Look out over Athens from the Acropolis and marvel at amazing Meteora. Visit the Oracle at Delphi and explore the home of the Olympic games at Olympia.

Athens - Discover one of the world's oldest cities, from the ancient Acropolis to the modern Panathenaic Stadium
Olympia - Learn about the site of the original Olympics, where the Statue of Zeus - an ancient Wonder of the World - once stood
Meteora - Admire the stunning, UNESCO-listed rock formations and clifftop monasteries
Peloponnese - Cross the rocky peninsula at the heart of Greek history, home to Epidaurus, Mycenae, and the Corinth Canal
Delphi - Follow the Sacred Way in the footsteps of pilgrims who sought the oracle's advice at this holy sanctuary
Thermopylae - Relive the Spartans' famous last stand against the Persians on this narrow pass

6 nights 4 star hotels
One arrival transfer on Day 1 and one departure transfer on Day 7 included per booking
Entrance fees for all included sites
All transfers and transportation in modern air conditioned vehicles
6 breakfasts and 3 hotel dinners
Guided sightseeing in Athens, Olympia, Delphi, and Meteora
Services of an English-speaking tour guide for all scheduled sightseeing
Note: Touring is operated in conjunction with other tourist groups, not solely On The Go. You will join travellers who booked through other operators for sightseeing each day, some staying in different hotels, and spend your evenings at leisure. The group can vary in size from 20 - 45 persons. Guiding may be in an additional language to English

International flights and visas
A hotel tax of €3.00 per room per night to be paid directly to the hotel at time of check in. See Trip Notes additional info for details
Tipping - an entirely personal gesture

Welcome to Athens, the capital city of Greece. Upon arrival at the airport you'll be met and transferred to your hotel. You'll have the rest of the day to discover the city, home to an exquisite architectural history and an equally thriving modern society.
Overnight: Athens

Today we embark on a coach tour of Greece's vibrant capital city, named after the goddess Athena and thought to be over 3000 years old. Sights include the Panathenaic Stadium, the only stadium in the world built entirely of marble, and the Temple of Olympian Zeus, which lies at the heart of modern Athens. The highlight of our day is the Acropolis, considered by some to be the most important ancient site in the western world. Here we find masterpieces of classical Greek architecture, including the iconic Parthenon. We also enjoy a guided tour of the Acropolis Museum, recently voted one of the best museums in the world.

Enjoy the afternoon at leisure in Plaka, a historical and picturesque part of the city. Take a stroll through the cobbled streets or relax with a drink at one of the many tavernas in the area. Don't forget to shop for souvenirs on Ermou Street.

The Peloponnese and Mycenae

Athens - Epidaurus - Mycenae - Olympia. Today we depart Athens and head for the Peloponnese, a region which was the setting of many great myths and legends. Our first stop is the narrow Corinth Canal, a man-made waterway completed in 1893 after centuries of attempts. We then continue to the beautifully preserved theatre at Epidaurus, a sanctuary famed for medicine & healing in antiquity. Next we visit the World Heritage site of Mycenae, the early civilization excavated by Heinrich Schliemann. We'll see the Cyclopean walls, Tomb of Agamemnon, and Lion Gate. We continue across the Peloponnese mountains to Olympia for the evening.
Overnight: Olympia  |  Breakfast, Dinner

Olympia - Delphi. Today we explore the home of the ancient Olympic Games. Situated along the longest river in the Peloponnese, the Alfios, Olympia is a fascinating step back in time to the birth of one of today's biggest sporting events. We visit the Temple of Zeus, the Palestra and Phidia's workshop.

Heading north this afternoon, we cross the impressive Rio-Antiro Bridge before heading for our final stop of Delphi.
Overnight: Delphi  |  Breakfast, Dinner

Delphi - Kalambaka. The sanctuary at Delphi was revered in antiquity as a centre of pilgrimage, home to the Pythian Oracle in the Temple of Apollo. We'll walk up the Sacred Way, the path followed by ancient visitors through the sanctuary, to see the temple ruins, and visit the local museum, where we'll find the bronze Charioteer statue and mythical omphalos stone. Afterwards, we cross the mountains of central Greece back to the mainland, arriving in Kalambaka for the evening.
Overnight: Kalambaka  |  Breakfast, Dinner

Kalambaka - Athens. This morning we visit Meteora, a stunning World Heritage site where a series of towering rock formations shelter several sacred Eastern Orthodox monasteries. We return to Athens for the night, briefly stopping at Thermopylae, where King Leonidas and 300 Spartans made a famous last stand against the Persians in 480 BC.
Overnight: Athens  |  Breakfast

Our tour of the wonders of Greece ends today after breakfast, with an included transfer to the airport for your departure flight.
Breakfast

Departure dates are guaranteed with a minimum of 4 persons. 'Twin Share' prices are per person when there are 2 people sharing a room. 'Single Room' prices are applicable to those who don’t have anyone to share a room with or anyone wanting the privacy of a single room.

The hotels listed below are ones which we frequently use on this tour. We reserve the right to substitute these hotels to ones of a similar standard. 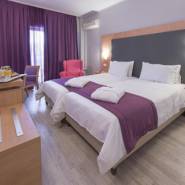 In the heart of Athens, the Polis Grand is a contemporary hotel with excellent facilities. Guest rooms are well appointed with elegant furniture and all modern conveniences. Some rooms are equipped with a balcony with fantastic views over to the Acropolis. The hotel benefits from a number of eateries which serve up an array of Greek and international cuisine as well as tasty coffee and delicious pies. Definitely head for a cocktail in the evening at the roof garden bar for amazing views across the city.

Nestled in the historic centre of Athens, the Titiana offers beautiful accommodation all classically designed. The ensuite guest rooms are furnished to a high standard with neutral tones and wooden flooring. Breakfast is served in the impressive rooftop Olive Garden restaurant which affords amazing views across the city including the Acropolis. The hotel also benefits from complimentary Wi-Fi and a fitness centre. 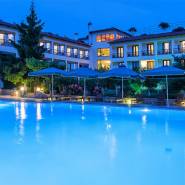 Set at the top of Drouvas Hill, Hotel Europa offers views of the Arcadian Mountains and Alfios Valley from your own private balcony. The spacious guestrooms also feature marble floors and modern amenities, with free WiFi and breakfast included. Relax on the comfortable sunbeds by the outdoor pool that is surrounded by luscious greenery. Within the garden there is a Greek tavern where you can enjoy a delicious feast of Mediterranean cuisine prepared with natural and organic ingredients. 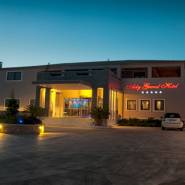 Located on top of a hill overlooking Olympia, the Arty Grand Hotel is all about the guest experience. From the welcoming reception hall, up to the spacious rooms and beautiful verandas, the Arty Grand provides world-class treatment. Arranged over three floors, there is an outdoor swimming pool and spa centre, where you can relax with a rejuvenating massage after a day of exploring. The hotel serves a daily breakfast buffet and you can order from the lunch and dinner menu. Then take your pick between the hotel or poolside bar to enjoy an evening drink. 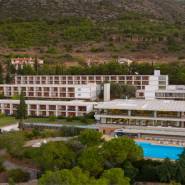 Located at the foot of Mount Parnassus, Hotel Amalia overlooks a picturesque green valley and the Ionian Sea. Guestrooms are spread over four levels, offering plenty of natural light and all the essential amenities. Relax in the main lounge where you can enjoy the magnificent vistas by a rustic fireplace. Next to the beautiful gardens you will find the main restaurant, serving up a rich American breakfast buffet and a la carte lunch and dinner featuring Greek cuisine. You can also enjoy coffee, fresh juice and cocktails as you unwind at the poolside bar. 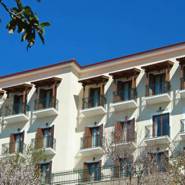 Situated in an ideal location within the modern town, Hotel Apollonia provides the perfect base for exploring ancient Delphi. Offering a majestic view of the Corinthian Gulf, the hotel combines wood and stone in a traditional-style build. The spacious guestrooms and modern facilities offer a very comfortable stay, with a delicious breakfast and dinner served in the hotel restaurant. You can also relax by a cosy fire with a drink or two from the bar. 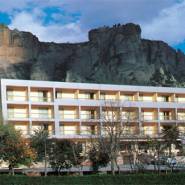 Offering the chance to enjoy traditional Greek hospitality within a contemporary setting is the Hotel Divani Meteora. Surrounded by natural beauty, the hotel is set in front of the World Heritage-listed Meteora sandstone monasteries. The fully renovated hotel has a welcoming decor, with warm shades and a luxury wooden floor. A tranquil restaurant offers delicious Mediterranean cuisine and there is an outdoor and indoor pool. You can also unwind after a day of exploring in the sauna steam bath or bubbling Jacuzzi. 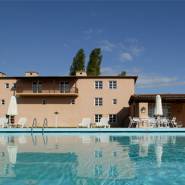 Hotel Amalia is embedded on 14 acres of beautiful greenery. Built from traditional materials to match its surrounds, the hotel features extensive gardens, a large swimming pool and distant views of the Meteora Rocks. Guestrooms are spacious and fully equipped with the latest facilities. In the dining area, a rich American buffet breakfast is served with both local and international cuisine available for lunch and dinner. Relax by the fireplace in the hotel’s cosy lounge bar and listen to piano music as you sip a cocktail.

The tour and tour guide were excellent. The tour guide spoke clearly and mentioned a lot of interesting things. I loved the scenery and the way we could see it. The tour actually made me want to stay longer on vacation in Greece and I would if I could.

I also have to say this, our driver was absolutely excellent.”

On our Handpicked range we bring you the most iconic experiences in destinations where you’ll join travellers from other travel brands on your tour, safari or sailing holiday. Collaborating with our carefully handpicked portfolio of local partners, these holidays represent exceptional value and there’ll be plenty of cultural experiences shared with other like-minded travellers.

Group sizes and accommodation standards vary by destination where typical group size is 28 travellers and hotels, boats and safari lodges are of a 3-4 star standard.

Guaranteed Departures
This tour is 100% guaranteed to depart with travellers.
Compare Tours
Select up to 3 tours to compare prices, itineraries and complete tour options:
Accommodation on Tour

For all our tours and tailor-made holidays we provide you with a clear categorisation of all hotels we use. The REGIONAL CATEGORY indicates the local rating of each hotel in each respective country. We have also rated each hotel using OUR CATEGORY, which will be in line with generally accepted western hotel grading standards.

Simple
Basic hotels and simple accommodation is a no frills option with an adventurous authentic feel.

Superior
Superior accommodation equates to a Western 4-star standard, featuring en-suite rooms and usually a restaurant and often a swimming pool and/or a fitness centre.

Luxury
Luxury accommodation equates to a Western 5-star plus standard - the creme de la creme. Featuring spacious, en-suite rooms, a restaurant, swimming pool and fitness centre and an array of amenities, this accommodation is a cut above the rest. Sheer opulence!

Discover the best of Greece from its ancient ruins to its beautiful islands. Choose from tours that focus on the country's fascinating ancient wonders on the mainland, trips that allow for lots of relaxation on the islands of Santorini and Mykonos or choose a bit of both as well as some cruising in Rhodes and Crete as well. 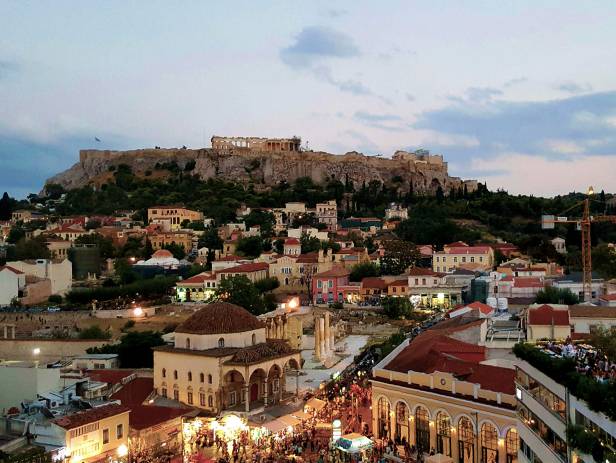 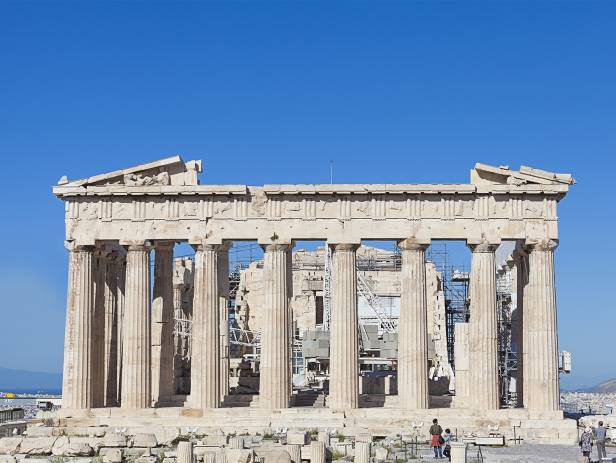 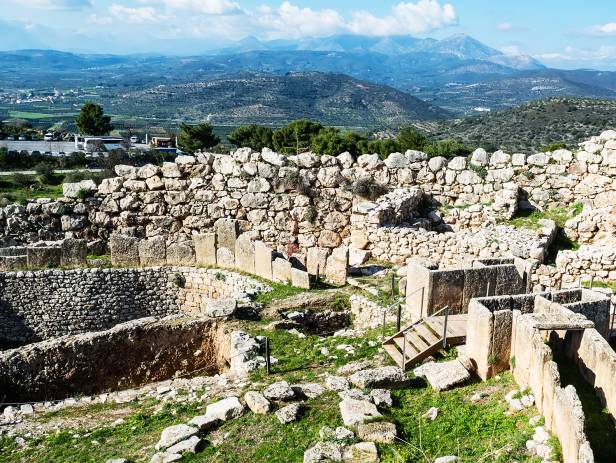 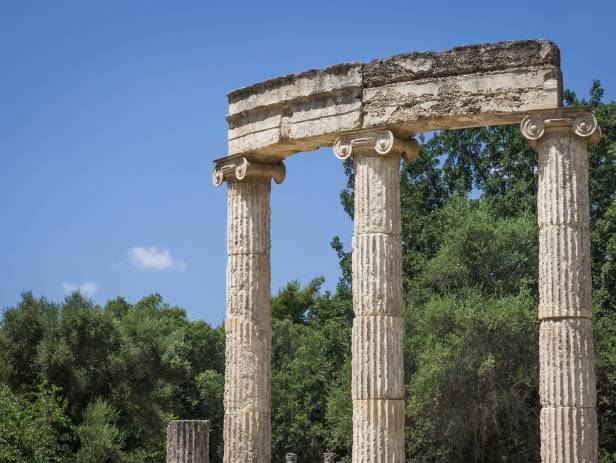 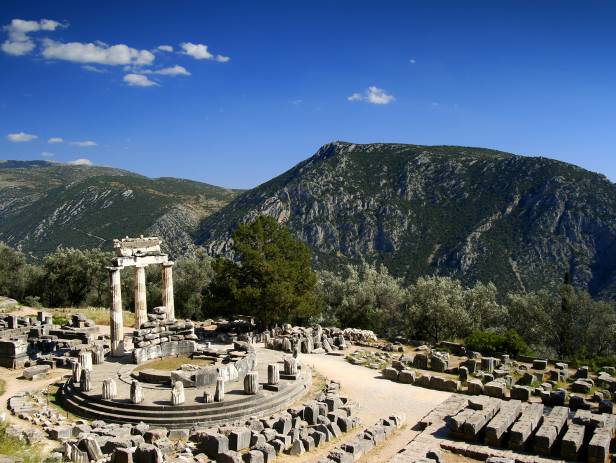 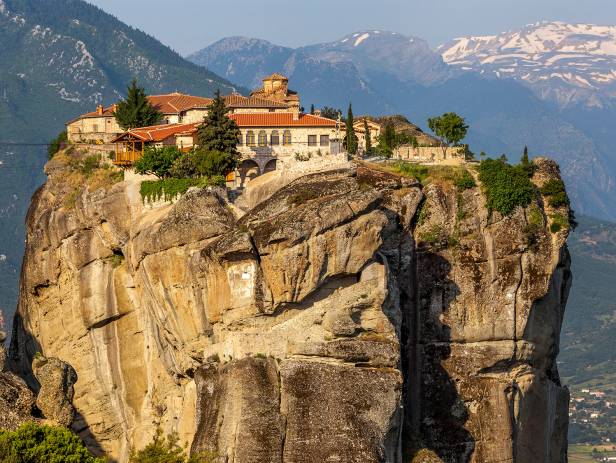